Following the tradition of the last years, here are some statistics about the use of Freesound during 2018 🙂 . The statistics are presented following the same structure as in 2016′s and 2017′s post, with a special focus on analyzing sound ratings at the very end.? But let’s start from the beginning: the number of new sounds uploaded during 2018 is (drum roll)…

Now let’s look at the distribution of licenses of these 36k uploaded sounds: 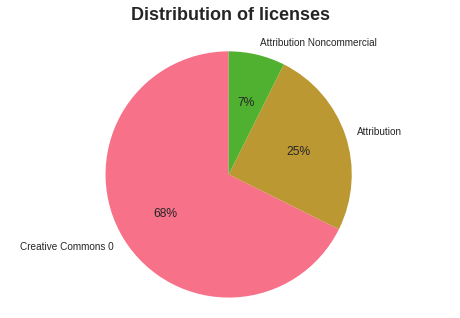 As we predicted in 2017 in numbers post, this year Freesound has passed the mark of 400k uploaded sounds (although it happened at the very end of the year!). That’s bringing us closer to the half a million mark but there’s still long road ahead for that. Here you can see the evolution of the total number of sounds hosted in Freesound since the beginning of time (see the last dot right above 400k): 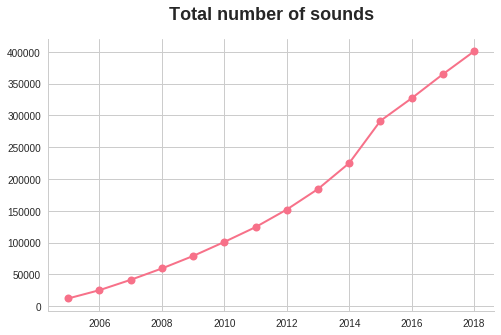 In fact, if you wanted to embark on the task of listening to all sounds uploaded to Freesound it would now take 242 days and 16 hours! Don’t try and do it yourself, instead let’s take this opportunity to thank our amazing team of moderators who do indeed listen to countless sounds and make all this possible: qubodup, InspectorJ, parabolix, Erdie, Headphaze, tim.kahn, philsapphire, AlienXXX and balloonhead.

Let’s now look at the tagcloud of the sounds uploaded during this year: 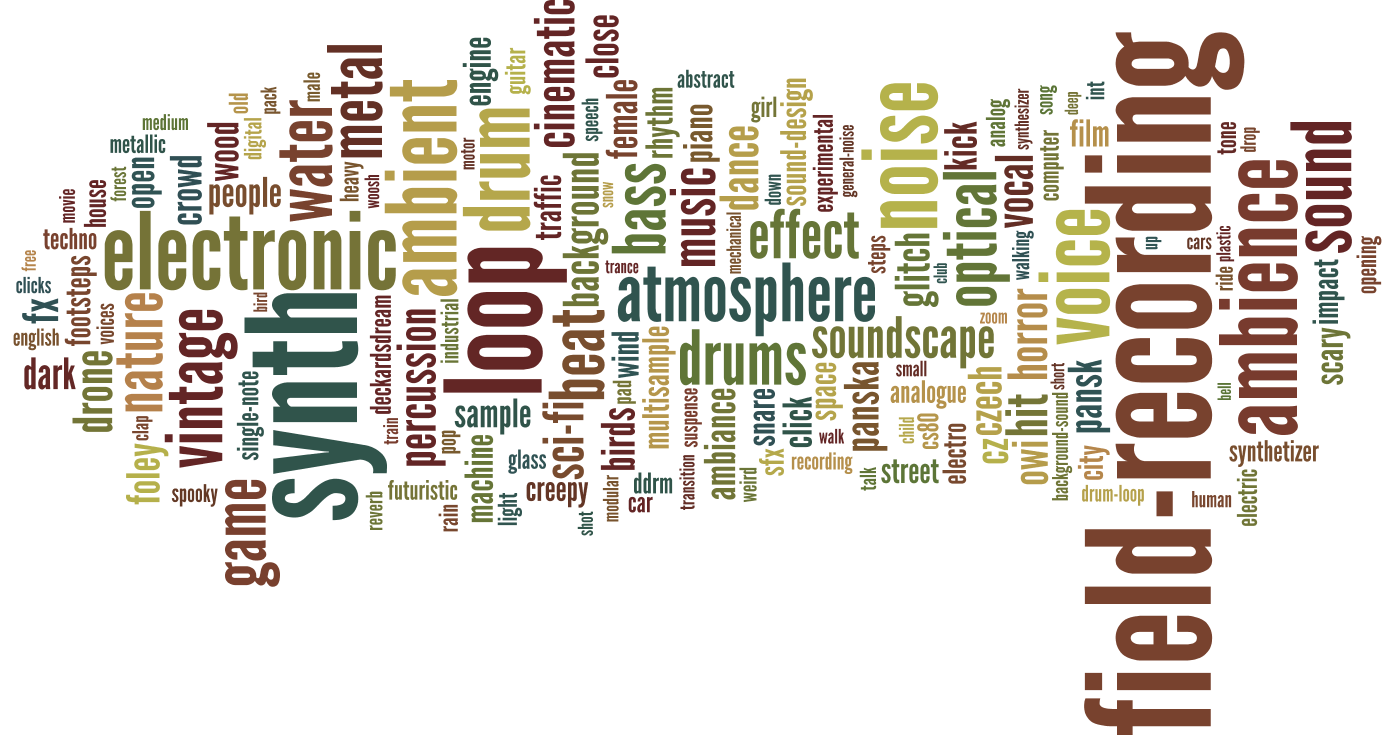 Again field-recording is the king, and many of the other typical frequently-used tags are also visible here: ambience (sharing the glory with ambient), synth, loop, electronic, etc. Not many big changes in that area, at least changes that can be easily spotted. Maybe for a future freesound in numbers blog post we’ll have a deeper look at this tag cloud.

Here is the ranking of uploaders by number of sounds and by duration of uploaded sounds. Yeah, this is what you were waiting for:

This time we have the same winner in both rankings, user kyles with 3284 uploaded sounds corresponding to 113 hours of audio. A thing that the 3 users in the top ranking of # uploaded sounds have in common is that they all used the new bulk describe feature that was introduced last June 🙂 . For those who don’t know, uploading full sound collections now is easier with this tool. Just like craigsmith did with the USC optical sound effects library, and kyles is doing with his own recorded professional collection. In any case, it’s simply marvelous that there are so many contributions from so many users. On behalf of the Freesound user community and everyone that uses Freesound, huge thanks to all uploaders! You know our twitter timeline is full of people really grateful to all of you right?

Let’s continue with some quick numbers about downloads.?The number of sound downloads (including packs) during 2018 was… 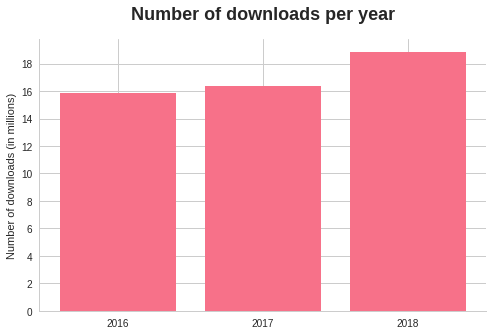 We’ll see what happens next year, but it doesn’t look like these numbers are going to get any lower. Freesound accumulates now more than 129M downloads! And how could you maximize the number of downloads of your sounds? Look at the cloud of query terms to see what people is searching for: 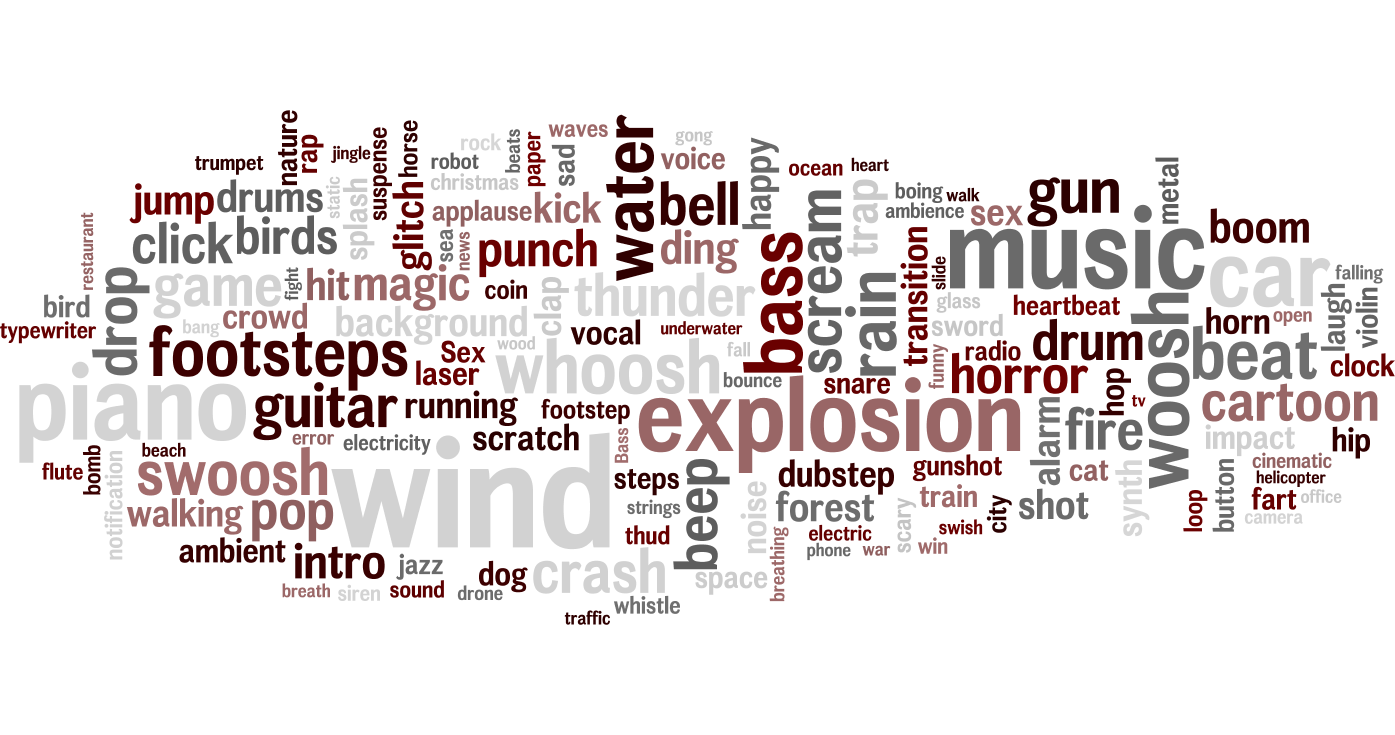 Again, not many changes with respect to the last year. wind, music, explosion and whoosh are again in the first positions, although a sudden interest for piano and car seems to have appeared. Remember that there are around 150k queries per day, so there’s really room for everyone here!

Finally, we’d like to finish this post with some more general statistics. In 2018, you’ve exchanged 19k messages, 1.4k forum posts and made?44k sound comments. These numbers are very similar to those of 2017. Regarding sound ratings, this year there have been 158k sound ratings, which confirms a tendency of increasing ratings from 2016 and 2017. Here we show the histogram of the number of ratings per sound: 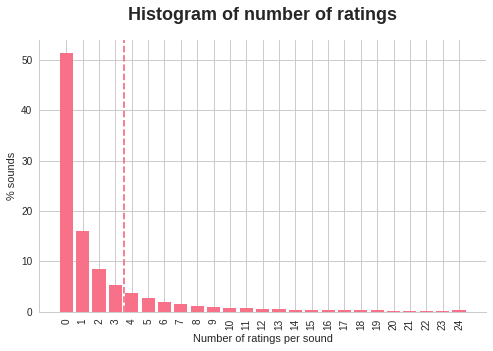 This histogram should be read like ?50% of the sounds in Freesound have never been rated?, ?5% have been rated 3 times?, and so on. Even though the average number of ratings per sound (dashed line) is of 3.5, this is just because a few sounds have been rated many times. This is similar to what happens with the number of downloads and that we reported last year in the 2017 in numbers post. However, in this case the number of ratings is much lower than the number of downloads 🙁 .? In old Freesound times we used to show a popup asking for a rating right after downloading and this resulted in many more sounds being rated. We’ll have to think whether or not something like this could be re-added to Freesound, specially now that we’re re-thinking and updating the whole Freesound interface… Another interesting aspect about ratings is to look at the histogram of the average rating value per sound: 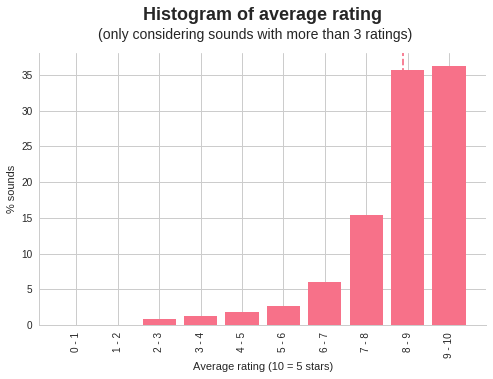 What this figure shows is that sounds are typically rated very high (average of 4 stars), so users normally rate a sound only when they like it, but do not use low ratings to penalize sounds they dislike. Interesting food for thought, should we forget about 5-star rating system a move into a binary like/dislike option?

Aaaand that’s it for this year’s post. We hope you found it interesting. Thanks for reading and enjoy a 2019 full of sounds!

frederic, on behalf of the?Freesound Team

EDIT:?after writing the post Alastair suggested me the idea of ?making a summary of the Freesound year in audio. Good news is that I already developed a tool some time ago that would make just that automatically 🙂 I set myself to run the tool and record the output… and here it is the Freesound 2018 in Sounds:

Freesound 2018 in Sounds comes in two different flavours, check the description of each sound for more information 🙂