Just like we did one year ago, we have collected some statistics of Freesound usage during 2017 and we’d like to share them with you. The stats will be presented following the same structure as in last year’s post so let’s get started with the number of new sounds uploaded during 2017: 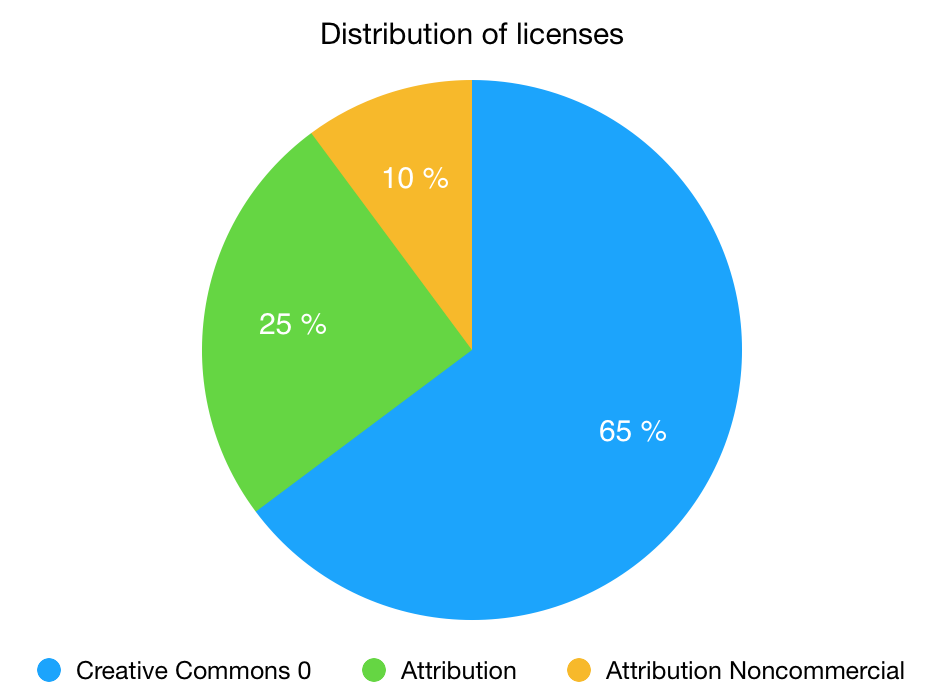 Freesound currently hosts more than 363k sounds, which means that it would take you?a full 213 (and a half)?days to listen to all of Freesound 😉 We still have not reached the mark of 400k sounds, but if you continue uploading sounds at the same rate it’s just a matter of months until we get there…

If we look at the tagcloud (see below) of the uploaded sounds we’ll see that, again, field-recording is the most used tag of 2017. However we see also other tags which are very common: vsco-2, multisample and single-note among others. This is because of the addition of the?Versilian Studios Chamber Orchestra 2 Community Edition library of ~3,000 instrument samples that happened back in January 2017. 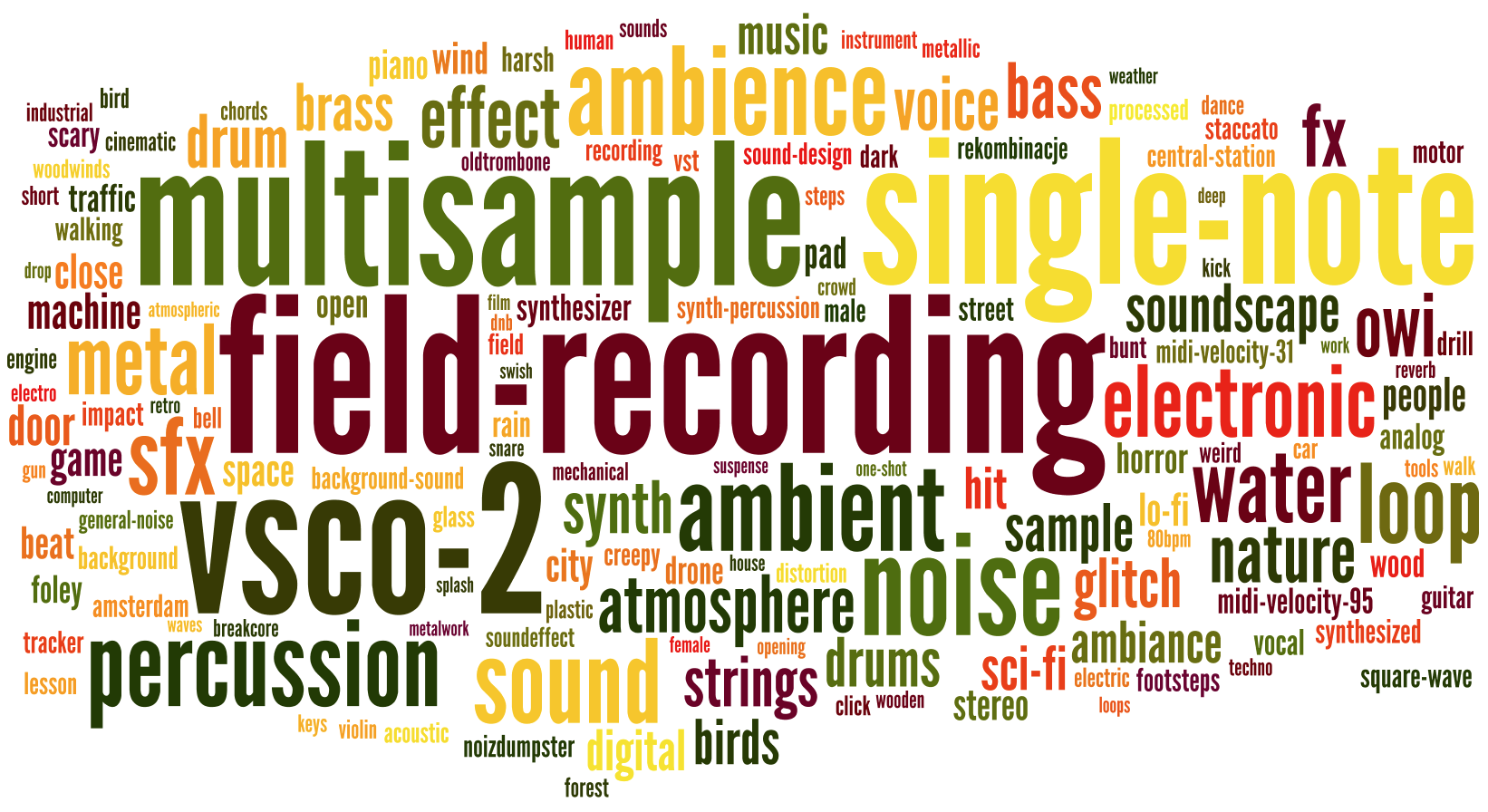 And now getting to the ranking of uploaders. Last year there was a bit of controversy because we showed a raking of users sorted by the number of uploaded sounds during 2016, but this did not take into account the duration of the sounds. So this year we are showing two rankings, one ordered by number of uploads and the other ordered by total uploaded time:

As you can see, the number of uploaded sounds and the total number of uploaded hours are different beasts, but there are some users who made it into both rankings. Congratulations to all uploaders (and moderators!) regardless of whether you are or not in the ranking!

Let’s now continue with statistics about the number of downloads. The number of sound downloads (including packs) during 2017 was…

So yes, you’ve beaten last year’s record of downloads. In fact, Freesounders have made more than?110M downloads in all its history, which means an average of 300 downloads per sound. Quite a number! Nevertheless, if we look closely at the downloads data, we see that there are a few sounds which are downloaded A LOT, and MANY sounds which are not downloaded much. In statistics, this is called a long tail distribution, and it’s something very common. Here we show a histogram of the number of downloads per sound: 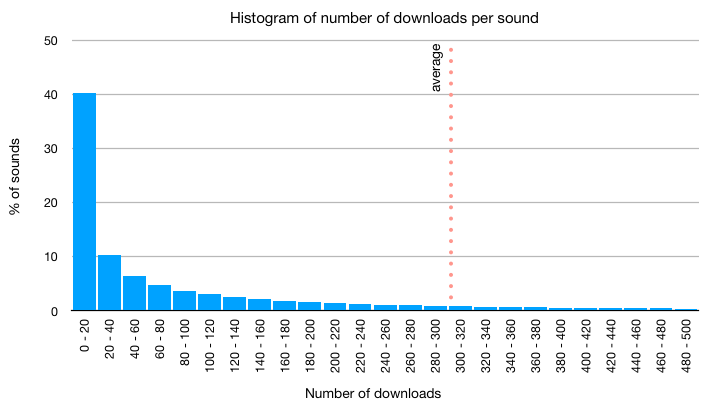 This histogram should be read like “40% of the sounds in Freesound have been downloaded between 0 and 20 times”, “10% have been downloaded between 20 and 40 times”, and so on. In this histogram we only show up to 500 downloads per sound, but to make it complete we should show until ~130,000 downloads per sound (which is the number of downloads of the most downloaded sound in Freesound). The global average is at 300 downloads/sound, but the the likelihood of getting 300 or more downloads after uploading a sound in Freesound is not as high as you would expect (only one out of six sounds get, at least, that many downloads!). However don’t worry too much, 96% of sounds get at least one download 😉 In any case, you know what you have to do: upload awesome sounds! But before downloads happen, people need to search for stuff, so let’s see what Freesound users are searching for:

Does this look familiar? It looks quite similar to the termcloud we showed one year ago doesn’t it? Well, apparently wind, explosion, music and whoosh (in all it’s spelling variants) are still the most commonly used search terms. For example, on average for every day, there are more than 400 queries with the term wind and more than 270 queries with the term explosion. Other terms in the termcloud like scream or footsteps also seem to be pretty stable from one year to the next. We’ll see what happens in 2018!

To finalize this post, some numbers about messages, ratings,?forums and?comments. During 2017, you?ve sent more than 19k messages, added 140k sound ratings, written 1,900 forum posts and made more than 43k sound comments! With the exception of sound ratings (which has increased), these numbers are slightly lower than last year’s stats. We’ll see what happens next year after the new interface has been released and the impact that it will have on all these numbers.

Thanks for reading and enjoy a 2018 full of sounds!